As A Man Seeketh

This little volume is the result of over 40 years of writing my personal journals or over 60 years of living life on earth seeking to find the Meaning & Purpose of Life. Right from my vivid days of lying down in a large baby cot as the 7th child of my goodly parents, I was already pondering about life. I was well guided by my parents, my mother being typical of women in those days who had received less formal education compared to men like my father who studied in Penang Free School built by the British and had the opportunity to be sent to England to be qualified in Photogrammetry and Aerial Surveys. My mother was a busy housewife and mother of 7 children.

I was born in British Malaya after it became independent from it's colonial rulers to become the country of Malaysia. My world began in a home that was what was called a government quarters, originally built by the British government where my father was called a government servant. He worked as a land surveyor to chart the maps of the country to be known as Malaysia after it became independent in 1957. I was born the year after to become a Malaysian, living in the capital city of Kuala Lumpur to this day of writing this page in the year 2021. (REF)

To live to this age, after a life of just over 60 years, makes me feel like I've advanced to a science fiction era of the world I had imagined from watching the Star Trek television series during my early teens. Living in the capital city of the country had many advantages, especially when my father was working with the government, even after a peaceful independence from the British. From his friends working with the early Malaysian government too, I recall that at age about six or so, I could watch the first black and white television transmission at the home of my father's friend who worked for Radio Television Malaysia.(RTM)

Soon it was time for me to go to school, first to a kindergarten at age 6 for a year. Yu Der Kindergarten was where I had my early formal play school experience. Located just about a mile away from home, in the area called Imbi, I was later placed in a formal elementary or primary school named Pasar Road English School (PRES). It was a rough school I recall and my parents were worried that I might turn out to become a gangster later on in life, like some of the kids who came out of the school! So I was later transferred to a Catholic school of St.John's in my fourth year of elementary school with the advantage that I could also advance to the middle or secondary school when I was older. (REF)

FAST FORWARD to today, as I continue to write spontaneously very quickly as reflected in all my journals, I had spent time recently to create my own crafted page of James Allen in this journal. My spontaneous journals are a result of my connections to my consciousness that derives from my thinking mind generated by my biological brain. Everything connects from my biological Brain that generates thoughts in my Mind that creates my Consciousness. James Allen was already quoted in a much earlier journal when my father was alive in the year 2007 as in this extract:

"A series of events in life can sometimes be seen as coincidences or messages from beyond that help to shape our destiny. It is interesting that these events or coincidences can sometimes be influenced by our very own thoughts and hence the proverb, "For as he thinketh in his heart, so is he".( Refer to Proverbs 23:7 and also the book of James Allen inspired by the verse.) As I told my father, my first 50 years was really a life of learning and testing. I grew up with a curious mind and a heart that seeks to connect to people and things around me and even beyond. I developed a unique optimal view of life that keeps me sufficiently motivated in all the things I do or chose to do. I told my father with the usual style of great enthusiasm, holding up my right hand, I want the next fifty years of my life to be quite different from that of the first. In retrospection, I guess what I meant was in the past I was very busy doing many things in the learning curve. I went through academic life in my adolescence be it science, math or the arts. Then as I was about to turn into a real Man at 21, I received the priesthood and an inspired call to serve as a voluntary missionary in my own native land. When that was over, I started another mission where I became a husband and a father of a great family of 6 children. To become an effective provider for the family, I turned to the business world and became an entrepreneur and a consultant in the forefront of 'sunrise' or cutting edge technology businesses as my preference."

It was a special moment for me to have a chat with my father, to share with him my plans for the next 50 years of my life, if I can live that long! I extracted the above to highlight "seeks" as after reading and listening to James Allen's work several times, in as much as I knew what he had written in 1903 is true, I felt thinking wasn't sufficient by itself to help millennial age citizens of our planet today to achieve what I had named OPT Optimal Performance & Thinking in mid 2003. (REF)

Education from academia taught me how to think but nobody taught me how to seek as that comes from my personal feelings, the lower limbic part of the brain as opposed to the upper higher cortex. I have been a life long seeker of life, not just of the mind but covering the ancient tripartite nature of Man named as his Body Mind & Spirit, very much kept in the traditions of the East but unfortunately forgotten by the scientific western world. Only when the psychologists started doing research on Buddhist priests of the East did they realize the power of meditation to transform the brain and hence our mind. Daniel Goleman has done extensive work in this area and scientists like the late Jaak Panksepp supports my long known understanding of the power of seeking, naming it as one of the 7 emotions derived from the brain. (REF)

In the previous post on the works of James Allen entitled, "As a Man Thinketh", I like to note that it was written in 1903. Today in the year 2021, I am writing "As a Man Seeketh" in my context and with technology that is so readily available in this era of time.

I seek for happiness in family life

I thoroughly enjoyed the happiness of family life where my wife and I did our best to follow principles we mutually shared and passed on to our children too. They were in many ways different from the worldly ways.

I seek for success in business life

I wanted to prove to myself that I can be successful in business, any business actually as shared in TalkLane.

I seek for a healthy life

With consistent physical activities I would engage in wherever I am, I could enjoy sustainability in optimal health not just of the body but of the mind & spirit as well.

I seek for a spiritual life

The miracle that happened to me was later shared in our Church News and before that I had already recorded in detail what exactly happened to me in my journal. I frankly do not seek for miracles as my core belief has been, the harder you work, the luckier you get. I thank God for the miracles of my life that I view as simply bonuses given to me beyond what money can buy.

I seek for forgiveness in life

This is a tough one for every Christian but nevertheless, my testimony was strong enough to follow the Spirit of the Lord with my journal to remind me to do so. One of my favorite quotations has been "When the going gets tough, the tough gets going."

Popular posts from this blog 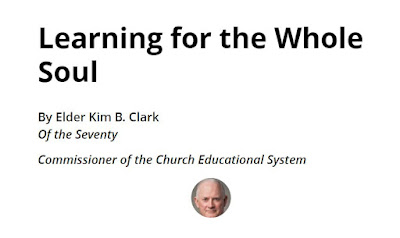 On my Happy Day, Friday 24 April 2021  From The Church of Jesus Christ of Latter-day Saints Some years ago, I was online reading an article from the Church website that can be read by clicking the photo above or  here. I was impressed by this paragraph, "The learning that allows each of you to rise “to the full stature of your divine potential” is what I will call deep learning: learning of the whole soul—the mind, the heart, the body, and the immortal spirit. Deep learning applies to every kind of knowledge, whether spiritual or secular. Learning is deep when it increases your power to do three things: (1) to know and understand; (2) to take effective, righteous action; and (3) to become more like our Heavenly Father." In 2020 when the Covid-19 pandemic lockdown started in March in Malaysia, I had just completed the renovation and furnishing of a new office at Blue Boy Mansion and moved all my books from home to the book shelves at the office. I've certainly kept a l
Read more

James Allen - As A Man Thinketh

As A Man Thinketh by James Allen Foreword This little volume (the result of meditation and experience) is not intended as an exhaustive treatise on the much-written upon subject of the power of thought. It is suggestive rather than explanatory, its object being to stimulate men and women to the discovery and perception of the truth that - "They themselves are makers of themselves" by virtue of the thoughts which they choose and encourage; that mind is the master weaver, both of the inner garment of character and the outer garment of circumstance, and that, as they may have hitherto woven in ignorance and pain they may now weave in enlightenment and happiness. James Allen (An alternative to reading the 7 chapters of his online book that starts from here is to scroll to the bottom or click here to advance there automatically to play the full recording.) Chapter One Thought and Character The aphorism, "As a man thinketh in his heart so is he," not only embraces the wh
Read more